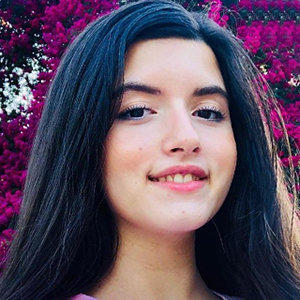 The estimated net worth of Angelina Jordan is $0.6 million USD.

Angelina Jordan (born Angelina Jordan Astar; 10 January 2006) is a Norwegian singer whose audition for the 2014 season of Norway's Got Talent, singing "Gloomy Sunday" in the style of Billie Holiday, became a viral video online and brought her worldwide press coverage at the age of 7.[1][2] She went on to win the competition with her performance of George Gershwin's "Summertime". Since then she has worked to raise millions of dollars on behalf of environmental causes and children's charities around the world. She always performs barefoot, after befriending a young shoeless girl and giving her shoes to her. Jordan wrote a book about the experience and became the youngest published author in Norway.

Jordan has released multiple digital singles, two EPs, and one album called It's Magic. She appeared on the first season of Little Big Shots in 2016, and the second season of America's Got Talent: The Champions in 2020, where her cover version of Queen's "Bohemian Rhapsody" brought her much attention.

In August 2020, it was announced that she has signed with Republic Records.[3] Her first single under that label, "Million Miles", was released in November 2020.[4] 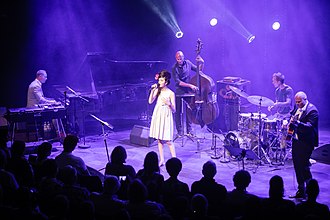 Jordan at Kongsberg Jazzfestival in 2018.

2014: From Norway's Got Talent to My Christmas

After Jordan's performances of two Billie Holiday songs, "Gloomy Sunday" and "I'm a Fool to Want You", on Norway's Got Talent, as well as "Fly Me to the Moon" on a TV talk show, all went viral online in March 2014, she was featured in Time,[1] Daily Mirror,[2] People,[5] and other news outlets around the world.[6] She continued in the competition singing Nancy Sinatra's version of "Bang Bang (My Baby Shot Me Down)" live in the semi-finals,[7] and won with her performance of George Gershwin's "Summertime", in the style of Ella Fitzgerald and Louis Armstrong's 1958 recording of the song.

In September 2014, she performed "Fly Me to the Moon" on the US television show The View,[8] bringing her wider fame in the United States. She also performed on several TV 2 programs in Norway over the next few years, including multiple appearances on Allsang på Grensen (Singalong at the Border, referring to the border fortress of Fredriksten where outdoor concerts are held) and on TV4 in Sweden.

Jordan had a small guest role in the final episode of the Netflix series Lilyhammer, playing a girl who sings in a bar.[9]

In December 2014, she partly realized a personal ambition of singing at the Nobel Peace Prize Concert by performing for Peace Prize recipients Malala Yousafzai and Kailash Satyarthi at the .[10]

Jordan's recording debut, the three-song maxi-single My Christmas, was released in December 2014.[11] To support the release, Jordan performed the songs on multiple TV shows, including an appearance on Christmas Day.

In 2015, Jordan began recording music that would eventually be collected on the six-song Angelina Jordan – The EP, released on 27 November 2017.[12] Many of the tracks were posted to her official YouTube channel[13] well in advance of the EP release, in the form of music videos and lyric videos. These included her covers of Screamin' Jay Hawkins' "I Put a Spell on You", the music video for which was directed by Per Heimly, and Amy Winehouse's "Back to Black", in which Jordan sang her own original lyrics. These two music videos became the most popular videos on her official YouTube channel, surpassing 5 million views each by 2020. In 2017, she created a second YouTube channel specifically to present performances of cover songs.[14]

In November 2015, Jordan published the book Mellom to hjerter (Between Two Hearts), which was illustrated by her grandmother, Iranian artist Mery Zamani.[15] The book tells the story of her meeting a poor motherless girl in the Middle East who has no shoes. After a long conversation in which they discuss their dreams in life, she gives the girl her shoes and the girl promises to pray for Jordan to fulfill her dream to become a successful singer. According to Jordan the book is based on a real incident that happened when she was six, which she cites as the reason for always performing barefoot.[16]

In April 2016, Jordan performed "Fly Me to the Moon" on the first season of the noncompetitive children's talent show Little Big Shots.[17] A year later she performed "What a Difference a Day Makes" on the UK version of the show. She also performed "I Put a Spell on You" on the German edition of the show, Little Big Stars, in 2017.

In December 2016, she performed on Alan Walker is Heading Home, a live concert broadcast from Bergen, Norway, where she sang Walker's songs "Sing Me to Sleep" and "Faded".[18]

On 15 June 2018, a full album of recordings with Staff Band of the Norwegian Armed Forces (Forsvarets stabsmusikkorps), called , was released.[19] The next day, Jordan and the band performed the full album live in a concert attended by Norway's Prime Minister.

On 27 June 2018, Jordan performed "Fly Me to the Moon" for Quincy Jones in The O2 Arena in London, as part of his 85th birthday celebration, and also joined with other singers to perform "Man in the Mirror" to close the show.[20][21]

In 2019, Jordan performed for former president Barack Obama and other public figures at the Brilliant Minds conference in Stockholm.

In October 2019, she competed in the second season of America's Got Talent: The Champions, which was aired in January and February 2020.[22] Her first appearance on the show, singing an original arrangement of Queen's "Bohemian Rhapsody", received a "golden buzzer" from judge Heidi Klum (meaning that Jordan would pass directly into the finals). As with her Norway's Got Talent audition six years earlier, a video of Jordan's performance began to go viral on YouTube, quickly reaching 10 million views.[23] The performance also garnered praise from Queen's official Twitter account.[24] Shortly afterwards, the video was taken down[23] and Jordan released a studio version of the same arrangement under her own copyright.[25] Jordan's second performance (in the finals), a similarly reworked "Goodbye Yellow Brick Road" based largely on a version by Sara Bareilles, was also well received, but she was not among the top 5 acts.

In August 2020, Jordan's manager (her uncle, Michael Astar) announced that she had signed with Republic Records.[3] Her first single on the label, "Million Miles", was released on 6 November 2020, on all major digital platforms.[4] An official lyric video was posted to her official YouTube channel the same day.[26] The track was produced by the Norwegian duo Stargate, who also co-wrote the song with Jordan.[27] She has since released two additional music videos for the song: one showing her singing the song "live" in a recording studio, the other an "official music video" featuring her younger sister.[28][29]

Jordan was born in Oslo, Norway, and has lived for extended periods both there and in Los Angeles. She also lived for a time in the Middle East. She has a younger sister who has been featured in two of her music videos. Her father, Gerry Christian Slattman, is Swedish.[30] Her Norwegian mother, Sara Astar, is the daughter of Iranian artist and poet Mery Zamani and a Japanese father.[31][16]

Jordan attended the Oslo Waldorf School and participated in the Oslo School of Music and Performing Arts after-school program, where she received vocal training and piano lessons. In addition to singing and playing the piano, she plays violin, guitar, and flute, and also paints.[32]

As of 2020, she was living and going to school in Los Angeles.