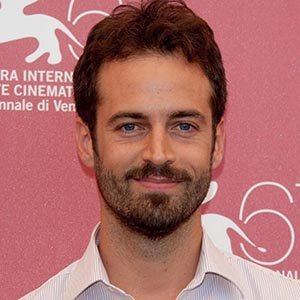 The estimated net worth of Benjamin Millepied is $3 million USD.

Benjamin Millepied (French pronunciation: ​[bɛ̃ʒamɛ᷉ milpje]; born 15 June 1977)[1] is a French dancer and choreographer, who has lived and worked in the United States after joining the New York City Ballet in 1995, where he became a soloist in 1998 and a principal in 2002. He has also created choreography for the company, and choreographed pieces for other major companies. He retired from NYCB in 2011.

He initiated the LA Dance Project, leading it from 2011 to 2014. He was Director of Dance at the Paris Opera Ballet from October 2014 and resigned in 2016. He is known for his work in the movie Black Swan (2010), which he choreographed, and in which he starred as a dancer.

Millepied was born in Bordeaux, France.[2] He is the youngest of three sons.[3] His ballet training started at the age of eight with his mother, Catherine Flori, a former ballet dancer. His father is Denys Millepied.[4][5] Between the ages of 13 and 16, he studied with Michel Rahn at the Conservatoire National in Lyon, France.

In the summer of 1992 Millepied attended classes at the School of American Ballet (SAB) and returned to study full-time in 1993, with a scholarship from the French Ministry (Bourse Lavoisier or Lavoisier Scholarship). Early in his career, Millepied was mentored by choreographer Jerome Robbins, who took an interest in him.[6] At SAB's 1994 Spring Workshop he originated a principal role in Jerome Robbins' premiere of 2 and 3 Part Inventions and also received the Prix de Lausanne.

Millepied also became a choreographer, creating dances for City Ballet, American Ballet Theatre, the School of American Ballet, the Metropolitan Opera, the Paris Opera Ballet, Ballet de Genève, and his own company, Danses Concertantes.[8][9][10] From 2006 to 2007, he was choreographer-in-residence at the Baryshnikov Arts Center in New York.

In 2011, L.A. Dance Project, founded and directed by Millepied, was launched with a commission, expected to last two years, from Glorya Kaufman Presents Dance at the Los Angeles Music Center. The company's operating budget is about $1 million a year.[13] Millepied partnered with composer Nico Muhly, producer Charles Fabius, composer Nicholas Britell, and Matthieu Humery to found the company.[14] In 2012, L.A. Dance Project established a full-time residence at Los Angeles Theatre Center[15] with the objective of presenting new works throughout the city. L.A. Dance Project's inaugural performance, commissioned by The Music Center was held at Walt Disney Concert Hall on 22 September 2012.

The premiere of "Reflections" by Millepied took place at Theatre du Chatelet in Paris on 23 April 2013. In 2013, L.A. Dance Project continued to tour at the Holland Festival in Amsterdam, Istanbul, Spoleto Festival in Italy, Edinburgh International Festival, La Maison de la Danse in Lyon, France and Sadler's Wells Theatre in London. In September 2013, at Maison de la Danse in Lyon, the company premiered two new pieces. The first premiere was Murder Ballads, choreographed by Justin Peck with music by Bryce Dessner. Next on the program was the premiere of Morgan's Last Chug choreographed and with light and sound design by Emanuel Gat.

In January 2014, L.A. Dance Project announced that its new home venue would be the Theatre at Ace Hotel.[16] By June 2016, L.A. Dance Project formed a three-year partnership with the LUMA Foundation in Arles, France, offering the nine-member company a continuing residency and performance space in the foundation's Parc des Ateliers.[17] L.A. Dance Project will spend five non-consecutive weeks a year in Arles, where the company will be able to work, create and produce.[18]

In January 2013, the Paris Opera Ballet announced that Millepied had accepted the position of director of dance.[19] He officially succeeded Brigitte Lefèvre on 15 October 2014.

During his time at the Paris Opera Ballet, Millepied brought in William Forsythe as an associate choreographer and collaborator on the new Academy, an in-house training program for choreographers. Millepied's first season opened with a celebrity-filled gala that raised over a million euros. He also established a digital platform for new work and organized dancer exchanges with the Mariinsky and American Ballet Theater.[20]

Relève, a ballet documentary by Thierry Demaizière and Alban Teurlai featuring Millepied as he mounts his first production as director of the Paris ballet, premiered in France on Canal+ in December 2015. As Reset, it later had its North American premiere at the Tribeca Film Festival.[21]

Millepied resigned from the Paris Opera Ballet on 4 February 2016 and was succeeded by Aurélie Dupont.[22]

In 2009, he served as choreographer for Black Swan, a psychological thriller directed by Darren Aronofsky which stars Natalie Portman and Mila Kunis as ballet dancers in New York City. He also danced and appeared in the film.[25] In 2010, he was the leading man in a short film co-directed by Asa Mader and starring Léa Seydoux, called Time Doesn't Stand Still.[24]

In 2012, Millepied founded The Amoveo Company, a multimedia production company and art collective. He has directed a number of short films in collaboration with various artists, including Mark Bradford, Philip Glass, IO Echo, Zeds Dead, and Lil Buck.

On the invitation of Los Angeles Music Center board member and TV host Nigel Lythgoe, Millepied was a guest judge on the dance competition show So You Think You Can Dance on 22 August 2012.[26]

In 1994, he received the Prix de Lausanne and the next year, he was the recipient of the Mae L. Wien Award for Outstanding Promise.[28]

In 2010, he was made Chevalier in the Order of Arts and Letters by the French Ministry of Culture.[29] 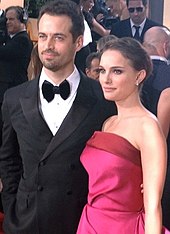 Millepied with wife Natalie Portman in 2012

Millepied met actress Natalie Portman on the set of Black Swan in early 2009[30] and reportedly left his live-in girlfriend at the time, Isabella Boylston, a principal dancer at the American Ballet Theatre, to begin a relationship with the actress.[31][32][33] Millepied and Portman wed in a Jewish ceremony held in Big Sur, California on 4 August 2012.[34][35] The family lived in Paris for a time, after Millepied accepted the position of director of dance with the Paris Opera Ballet.[36][37] They have two children: a son Aleph (b. 2011)[38] and a daughter Amalia (b. 2017).[39] In January 2014, Millepied said he was in the process of converting to Judaism (his wife's faith).[40] In 2016, the family moved from Paris to Los Angeles.[41][42]