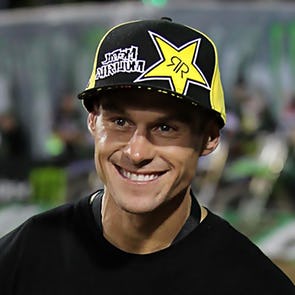 The estimated net worth of Brian Deegan is $10 million USD.

Deegan was the first to do a twisting backflip 360 in competition. With a total of 10 medals (two golds and seven bronzes), he is the most decorated Freestyle Motocross rider in X Games history and the only rider to have competed in at least one event in every X Games.

A co-founder of the Metal Mulisha[1] clothing line, Deegan is one of the most recognizable names in action sports. He earned 10 XG medals in Moto X, before he made the transition to four wheels. In 2010, Deegan earned double silver in Racing and RallyCross. In 2011, he took RallyCross gold and came back to earn bronze in 2012.

In 2004, at the Winter X Games, Deegan crashed while attempting a twisting backflip 360 over a 100 ft snow double, breaking his femur and both wrists. He came back 6 months later to place fourth at the Summer X Games.

In 2011, he won the World Championship race at Crandon International Off-Road Raceway in the Traxxas TORC Series. He also won the Pro Lite Unlimited and Pro 2 class championships in the Lucas Oil Off Road Racing Series. In addition, he represented the U.S. with teammate Travis Pastrana in the Race of Champions (ROC) competition held in Germany. ROC is an international competition that invites top drivers from around the world to compete in a series of different racing events.

In 2012, he debuted the Metal Mulisha Monster truck. Todd LeDuc officially debuted it at Reliant Stadium in Houston, Texas in January 2012. Deegan drove the truck in Phoenix, Arizona at Chase Field. Deegan also won his second championship in the Pro 2 class of the Lucas Oil Off Road Racing Series.

Deegan raced an OlsbergsMSE Ford Fiesta in the Global RallyCross Championship, earning runner-up in 2012, fourth in 2013 and 12th in 2014. He also continued his Lucas Oil Off Road Racing Series career, winning the Pro Light Unlimited championship in 2013 and the Pro 2 championship in 2014. In 2015, Deegan was hired by Chip Ganassi Racing to compete in seven Global Rallycross Championship races in an M-Sport Fiesta along with former professional motocross rider Jeff Ward.[3]

During a 2005 taping of MTV's Viva La Bam, Deegan under-rotated a back-flip and suffered a strong impact from the handle bars in his midsection, almost losing his life. He lost a kidney, lacerated his spleen, and lost a significant amount of blood. He now has a long scar down his stomach, that he calls his "zipper", spanning almost his entire abdomen, as a result of the accident. At the end of the episode when it originally aired, Bam dedicated it to Brian. The accident was cut out of the show.

In 2006, Deegan and Berkela films released a film entitled Disposable Hero that follows him through the struggles and rewards that accompany the freestyle motocross sport and lifestyle. Jesse James, Ronnie Faisst, Jeremy Stenberg, Cameron Steele, Chris Ackerman, Nate Adams, and Seth Enslow are a few of the featured cast that talk about Deegan and his life's journeys. The film aired on Spike TV on December 5, 2007.

He has been on the cover of Transworld MX and Racer X magazines and has been featured multiple times in FHM magazine.

Deegan was in the Game Boy Advance/Nintendo GameCube/PlayStation 2 video game Freekstyle. He also appeared in the 2000 game Supercross for the PlayStation.

In 2018, Deegan was the subject of the documentary Blood Line: The Life and Times of Brian Deegan.[4]

In addition to supporting riders, the Metal Mulisha has a clothing line and other related merchandise. Deegan also has a toy line called Hevy Hitters distributed in retail locations such as Walmart. Most recently he teamed up with Illektron to create Battlez FMX, a collectible card and dice game featuring Deegan, Todd Potter and Jeremy Lusk.

He is the former owner of the FMX park, the Compound, which he later sold to Nate Adams. At the 2007 X Games Deegan stated he sometimes regrets selling it.

He has been married to Marissa Deegan since 2003. Together, they have three children: Hailie Deegan, who currently competes full-time in the NASCAR Truck Series driving for ThorSports Racing; Haiden, who was recently signed to Team Star Yamaha as a amateur/pro rider; and Hudson, who competes in youth motocross.

Deegan became a born-again Christian after a near-fatal crash in 2005.[5]