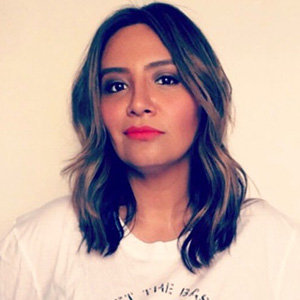 The estimated net worth of Cristela Alonzo is $4 million USD.

Cristela Alonzo (born 1978/79)[1] is an American comedian, actress, writer and producer, who created and starred in the ABC sitcom Cristela.[2] This made her the first Latina woman to create, produce, write, and star in her own US primetime comedy.[3][4]

Alonzo was raised in San Juan, Texas, the youngest of four children of mother Natalia Gonzalez, who worked double shifts at a Mexican restaurant for about 20 years,[5] and father Adalberto Alonzo, both of whom were from Mexico. When Alonzo's mother was pregnant with Alonzo, Alonzo's mother left her abusive husband and raised the children alone.[2] Alonzo has explained that she never met her father, who died in 2009.[6]

She has three siblings, older sister Julisa Maria Alonzo and older brothers Eloy Eduardo Alonzo and Ruben G. Alonzo.[2] Alonzo's mother came from the small village of El Zancarron in San Luis Potosi, Mexico.[7] Throughout her childhood, on her mother's weekly day off, Alonzo spent time with her paternal grandmother in Reynosa, Mexico, just across the border.[4]

For the first eight years of Alonzo’s life, the family squatted in an abandoned diner, and were homeless and destitute, even with her mother working double shifts as a waitress.[2] She often went hungry, and had problems with skin pigment due to a lack of nutrition.[2] Alonzo said her mother often used humor to offset the abject poverty.[8] Alonzo learned English from watching TV as her family spoke only Spanish at home; her mother never learned to speak English.[2] Television was a way for the family to stay inside, avoiding the violence from drug trafficking in their neighborhood. Alonzo would translate American shows into Spanish and act them out for her mother.[2] Alonzo and her mother were inseparable. Alonzo and her mother shared a bed until Alonzo turned 18.[2]

Alonzo was raised in a very strict Catholic household.[2] Because her older sister married young, she spent much of her childhood hanging out with her older brothers and became interested in comic books, trading playing cards, a lot of Star Trek: The Next Generation, Dungeons and Dragons, and metal music.[9] She graduated from Pharr-San Juan-Alamo High School.[6]

At age 18, Alonzo left home to attend Webster University to study theater in St. Louis. However, Alonzo dropped out because she could no longer afford school.[10] She went back to Dallas and moved in with her sister, where she took care of her mother who was sick and her sister's children.[10] Alonzo's mother died in 2002.[2]

In 2003, a year after her mother died, Alonzo got a job as an office manager at the Addison Improv[7] and started doing stand-up. Alonzo said that she started doing stand-up as a way to process her grief and talk about her mom and her family.[8] She was part of a small Dallas scene.[11] Alonzo eventually moved to Los Angeles to become a stand-up comedian.[2]

In 2006, Alonzo got her first break in Los Angeles when she was hired to write on a Comedy Central show.[12]

Alonzo spent two years traveling on a bus with the Honduran-born American comedian Carlos Mencia and several other comics.[2] Alonzo ended up leaving the tour. Alonzo then spent a lot of time on the road doing college comedy shows, where she found a lot of success.[2]

In 2010, Alonzo was a semi-finalist on the TV show Last Comic Standing, which raised her visibility and led to a May 2011 segment in the comedy showcase Legally Brown.[12]

Alonzo did a 30-minute segment of Comedy Central's The Half Hour on June 7, 2013.[11] She has appeared on Conan, Late Late Show with Craig Ferguson, Gabriel Iglesias Presents Stand Up Revolution, The Late Show with Stephen Colbert and Live at Gotham.

In 2013, with TV producer Becky Clements, Alonzo created her own semi-autobiographical comedy pilot Cristela for ABC.[13] She wrote the pilot with her writing partner, Kevin Hench. It was not greenlit as a part of the 2013–2014 television season. In an unusual move, they decided to plan to shoot a pilot presentation with the penalty money (a 30% fee they got when the network initially passed).[14] On February 26, 2014, they shot a pilot presentation,[15] filmed on the stage of Last Man Standing with much of that show's crew to save money; it got a strong testing response from the audience.[16]

In 2019, Alonzo published a memoir called Music to My Years: A Mixtape-Memoir of Growing Up and Standing Up.[26] The memoir release is accompanied by a stand-up tour called My Affordable Care Act.[27]

In 2020, in association with Vox Media Podcast Network, Alonzo hosted and voiced the 11-episode podcast Chicano Squad, which details the story of a five-man Latino homicide investigation squad who worked to resolve police injustice in the Houston area during the 1970s. The podcast first aired in December 2020 and recorded its final episode on March 16, 2021.

Alonzo is a frequent guest player on the game show 25 Words or Less.

In 2021, it was announced that Alonzo would host The CW's revival of the 1990s game show Legends of the Hidden Temple.[28]

Alonzo has a trademark, raucous laugh: "If I’m laughing, you know I’m either very happy or very sad", she said. "I cope with things with jokes."[2] She is an observational comic who reflects on stories in her own life. Inspired by Bill Cosby and Roseanne Barr and her favorite childhood shows (The Cosby Show and Roseanne).[29]

After the 2016 election, Alonzo has stated that with the mentorship and encouragement of Dolores Huerta and poet Sonia Sanchez, she became more politically active, with a focus on immigration and healthcare.[30]: 238 [31] She supported Julian Castro for his 2020 presidential campaign. Alonzo has been outspoken as to the lack of representation of Latino candidate Castro on Saturday Night Live in their coverage of Democratic candidates.

Alonzo was criticized for celebrating the death of Rush Limbaugh on Twitter on February 17, 2021, when she tweeted out the post "Happy Rush Limbaugh is Dead Day. I didn’t even get the chance to put my tree up!"[32] She was further criticized for doubling down by saying that she was "Not sorry...".[33]