Skip to content
The estimated net worth of Cymphonique Miller is $2 million USD.

Cymphonique Miller (born August 1, 1996),[2] known professionally as Cymphonique, is an American singer-songwriter and actress. She is the daughter of Percy Robert Miller (also known as Master P) and the younger sister of Romeo Miller (a.k.a. Romeo). She is best known in the acting world for her leading role as Kacey Simon on the Nickelodeon sitcom How to Rock.

Miller has performed on several national tours and in theme parks across the United States. She has also toured with Raven-Symoné, Ashley Tisdale, Demi Lovato, JoJo, Wonder Girls, College Boyys and Elizabeth Tselepi.

She was a finalist in Radio Disney's Next Big Thing but came in second place to Jasmine. Her songs "Butterflies", "Lil Miss Swagger" and "Daddy I'm A Rockstar" received airplay on Radio Disney. The music video for "Lil Miss Swagger," released when she was 12 years old, received more than 11 million YouTube views. Miller has guest-starred on Big Time Rush, True Jackson, VP, The Troop and Just Jordan.[2] 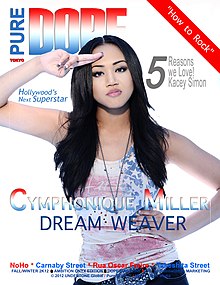 Miller on a cover of Pure DOPE magazine in 2012

In 2012, Miller starred in and contributed to the music for the Nickelodeon series How to Rock.[2][3]

The show lasted one season. She sings the theme song of Winx Club, an Italian animated series on Nickelodeon, and was also the voice of Princess Krystal on the show.[4] She is featured on the Big Time Rush song, "I Know You Know".[citation needed]

In 2011, Miller was nominated for "Best Female Hip-Hop Artist" at the BET Awards.[5]

On July 7, 2012, Miller performed the half-time show at the Los Angeles Sparks' Girl Scouts night at The Staples Center.[6]

Miller appeared on Mad TV, in numerous national commercials, and in public service announcements.[7] In 2013, she released a mixtape entitled Passion.[8][9]

The same year, she appeared in the film The Demsey Sisters alongside Lynn Whitfield and Denyce Lawton.[10]