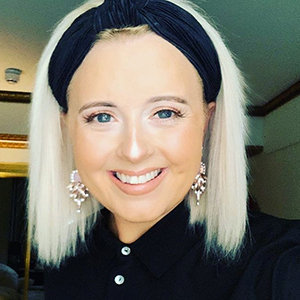 The estimated net worth of Katie Thistleton is $5 million USD.

Katie Lorna Thistleton (born 13 May 1989)[citation needed] is an English television and radio presenter, National Council for the Training of Journalists (NCTJ) qualified journalist and author, best known for her work across the CBBC channel. She presents a show on BBC Radio 1 with her co-presenter Vick Hope.

Born in Manchester, Thistleton attended Droylsden High School for Girls. Thistleton graduated from the University of Salford with a degree in English and Creative Writing along with fellow star Lauren Layfield, before qualifying as a NCTJ certified journalist after studying at News Associates, Manchester.[2]

Thistleton is best known for her work presenting in CBBC HQ, hosting the live 'bits in between the shows'. She has done this since she was headhunted for the job in 2013 whilst working behind the scenes for CBBC as a PA and Researcher.

Thistleton has also appeared on a variety of CBBC shows, including All Over the Place, Blue Peter, Jedward's Big Adventure, The Dog Ate My Homework, and Sam & Mark's Big Friday Wind-Up.[5] In March 2019, Katie Thistleton announced she would be leaving CBBC to focus on new projects. Her last day was on 29 March. It is unknown which presenter will take her place

Away from children's television, Thistleton has also appeared on Celebrity Eggheads, Celebrity Mastermind, and Children in Need.[6]

Thistleton is a regular at literary festivals, including the Edinburgh Literary Festival and Hay Festival. She has also judged The Blue Peter Book Awards and The Royal Society Young People's Book Prize.[8]

From May to December 2017, Thistleton hosted BBC Radio 1's The Surgery alongside Radha Modgil.[10]