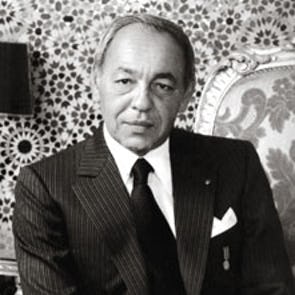 The estimated net worth of King Hassan II is $1 billion USD.


"Hasan II" and "Hassan II" redirect here. For other uses, see Hasan II (disambiguation).
King of Morocco from 1961 until his death in 1999
Amir al-Mu'minin

Hassan II (Arabic: الْحسْنُ الثاني بْن مُحَمَّدُ بْن يوسف بْن الْحسْنِ بْن الشَّرِيفِ بْن عَلِيُّ الْعَلَوِيِّ‎,[1] MSA: (a)l-ḥasan aṯ-ṯānī, Maghrebi Arabic: el-ḥasan ett(s)âni, Berber languages: ⵍⵃⴰⵙⴰⵏ ⵡⵉⵙ ⵙⵉⵏ / lḥasan wís sín) (9 July 1929 – 23 July 1999) was King of Morocco from 1961 until his death in 1999. He was a member of the Alaouite dynasty. He was the eldest son of Mohammed V, Sultan, then King of Morocco (1909–1961), and his second wife, Lalla Abla bint Tahar (1909–1992). Hassan was known to be one of the most severe rulers of Morocco, widely accused of authoritarian practices and of being an autocrat, particularly during the Years of Lead.

Prince Hassan at 13 years old, fourth from left in the back row, photographed behind Sultan Muhammad V, President Franklin D. Roosevelt, and Prime Minister Winston Churchill during the Casablanca Conference of 1943. 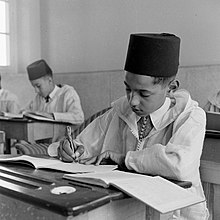 Hassan was educated at the Royal Academy in Rabat, where a class created for him was instructed by a faculty including Mehdi Ben Barka.[2] Hassan then earned a law degree from the University of Bordeaux.

He was exiled to Corsica by French authorities on 20 August 1953, together with his father Sultan Mohammed V. They were transferred to Madagascar in January 1954. Prince Moulay Hassan acted as his father's political advisor during the exile. Mohammed V and his family returned from exile on 16 November 1955.

Prince Moulay Hassan participated in the February 1956 negotiations for Morocco's independence with his father, who later appointed him Chief of Staff of the newly founded Royal Armed Forces in April 1956. In the unrest of the same year, he led army contingents battling rebels in the mountains of the Rif.[3] Mohammed V changed the title of the Moroccan sovereign from Sultan to King in 1957. Hassan was proclaimed Crown Prince on 9 July 1957,[4][5] and became King on 26 February 1961, after his father's death.

Hassan's rule, one characterized by a poor human rights record that was labelled as "appalling" and perhaps one of the worst in Africa.[6] King Hassan's conservative rule strengthened the Alaouite dynasty.[7] In Morocco's first constitution of 1963, Hassan II reaffirmed Morocco's choice of a multi-party political system, the only one in the Maghreb at that time. The constitution gave the King large powers he eventually used to strengthen his rule, which provoked strong political protest from the UNFP and the Istiqlal parties that formed the backbone of the opposition.[8]

In June 1965, Hassan suspended the constitution of 1962, dissolved the Parliament, declared a state of emergency, and ruled directly, although he did not completely abolish the mechanisms of parliamentary democracy.[9] When elections were eventually held, they were mostly rigged in favour of loyal parties. This caused severe discontent among the opposition, and protest demonstrations and riots challenged the King's rule. A US report observed that "Hassan appears obsessed with the preservation of his power rather than with its application toward the resolution of Morocco's multiplying domestic problems."[8]

Many militants of the National Union of Popular Forces were imprisoned and some party leaders sentenced to death. Student protests that took place 21 March 1965 in Casablanca, and devolved into general riots the following day; their violent repression caused many casualties. In the aftermath, on 26 March, Hassan II gave a speech that he concluded with: "There is no greater danger to a country than a so-called intellectual; it would have been better if you had all been illiterate."[10][11]

In October 1965, Mehdi Ben Barka was kidnapped in Paris and secretly murdered by Mohamed Oufkir.[2] King Hassan II, on his way to Friday prayers in Marrakesh, 1967.

In the early 1970s, King Hassan survived two assassination attempts. The first, on 10 July 1971, was a coup d'état attempt allegedly supported by Libya, organized by General Mohamed Medbouh and Colonel M'hamed Ababou and carried out by cadets during a diplomatic function at the King's summer palace in Rabat during his forty-second birthday party.[12] Important guests, including the Belgian Ambassador Marcel Dupret, were placed under house arrest, and the King himself was taken to a small pavilion.

Rabat's main radio station was taken over by the rebels and broadcast propaganda stating that the King had been murdered and a republic founded. The coup ended the same day when royalist troops took over the palace in combat against the rebels. It was subsequently claimed by the Moroccan authorities that the young cadets had been misled by senior officers into thinking that they were acting to protect the king.

On 16 August 1972, during a second attempt, four F-5 military jets from the Royal Moroccan Air Force fired upon the King's Boeing 727 while he was travelling back to Rabat from France, many bullets hit the fuselage but they failed to bring the plane down.[13] Allegedly, the King himself hurried to the cockpit, took control of the radio and shouted: "Stop firing you fools, the Tyrant is dead!" Eight people were killed when the jets strafed the awaiting reception dignitaries.[14] General Mohamed Oufkir, Morocco's defense minister, was the man behind the coup and was officially declared to have committed suicide after the attack. His body, however, was found with several bullet wounds.[15]

In the Cold War era, Hassan II allied Morocco with the West generally, and with the United States in particular. There were close and continuing ties between Hassan II's government and the CIA, who helped to reorganize Morocco's security forces in 1960.[16] Hassan served as a back channel between the Arab world and Israel, facilitating early negotiations between them such as Operation Yachin to secretly migrate Moroccan Jews to Israel.[17][18]

According to Shlomo Gazit of Israeli intelligence, Hassan II invited Mossad and Shin Bet agents to bug the Casablanca hotel where the Arab League Summit of September 1965 would be held to record the conversations of the Arab leaders.[19] This information was instrumental in Israel's victory in the Six-Day War. According to Ronen Bergman, Mossad then supplied information leading to Mehdi Ben Barka's capture and assassination in October.[20]

During Hassan II's reign, Morocco recovered the Spanish-controlled area of Ifni in 1969, and militarily seized two-thirds of Spanish Sahara through the "Green March" in 1975. The latter issue continues to dominate Moroccan foreign policy to this day. Relations with Algeria have deteriorated sharply due to the Western Sahara affair, as well as due to Moroccan claims on Algerian territory (Tindouf and Bechar), which unleashed the brief 1963 Sand War. Relations with Mauritania were tense too, as Morocco only recognized it as a sovereign country in 1969, nearly a decade after Mauritania's independence, because of Moroccan claims on the country (see Great Morocco). In 1985, Hassan II suspended Morocco's membership of the Organization of African Unity and enters into conflict with Burkinabe President Thomas Sankara because of his decision to recognize the Sahrawi Arab Democratic Republic.

Economically, Hassan II adopted a market-based economy, where agriculture, tourism, and phosphates mining industries played a major role. On 3 March 1973, Hassan II announced the policy of , in which state-held assets, agricultural lands, and businesses that were more than 50 percent foreign-owned—and especially French-owned—were transferred to political loyalists and high-ranking military officers.[21][22] The Moroccanization of the economy affected thousands of businesses and the proportion of industrial businesses in Morocco that were Moroccan-owned immediately increased from 18% to 55%.[21] 2/3 of the wealth of the Moroccanized economy was concentrated in 36 Moroccan families.[21]

Morocco's human rights record was extremely poor during the period from the 1960s to the late 1980s, which was labelled as the "years of lead"[23][24] and saw thousands of dissidents jailed, killed, exiled or forcibly disappeared. During this time, Morocco was one of the most repressive and undemocratic nations in the world. However, Morocco has been labelled as "partly free" by Freedom House, except in 1992 and 2014 when the country was labelled "Not free" in those years respectively. The country would only become more democratic by the early 1990s amid strong international pressure and condemnation over the nation's human rights record. Due to the strong rebuke from other nations and human rights groups, and also because of the realistic threat of international isolation, Hassan II would then gradually democratize the nation over time. Since then, Morocco's human rights record has improved modestly, and improved significantly following the death of Hassan II.

King Hassan II had extended many parliamentary functions[citation needed] by the early 1990s and released hundreds of political prisoners in 1991, and allowed the , where the opposition assumed power, for the first time in the Arab World.[citation needed] He set up a Royal Council for Human Rights to look into allegations of abuse by the State.

Hassan died of pneumonia and other health consequences in his birth town at the age of 70 on 23 July 1999. A national funeral service was held for him in Rabat, with over 40 heads of state in attendance, notably UN Secretary General Kofi Annan, American President Bill Clinton and French President Jacques Chirac. He was buried in the Mausoleum of Mohammed V. The coffin of Hassan II, carried by King Mohammed VI, his brother Prince Moulay Rachid and his cousin Moulay Hicham, was covered with a green fabric, in which the first prayer of Islam, "There is no god but God", is inscribed in golden writing.[25]

King Hassan II had five children with his wife Lalla Latifa Hammou, a member of the Zayane tribe, whom he married in 1961:

The king had one other wife, Lalla Fatima bint Qaid Ould Hassan Amhourak (cousin of Latifa Hammou), whom he also married in 1961. They had no children.

The father of Hassan II was Mohammed V of Morocco and his mother was Lalla Abla bint Tahar. He had five sisters and one brother: