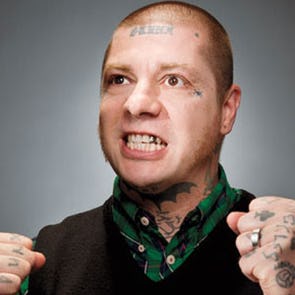 The estimated net worth of Lars Frederiksen is $13 million USD.

Lars Erik Frederiksen (born Lars Erik Dapello, August 30, 1971) is an American musician and record producer best known as a guitarist and vocalist for the punk rock band Rancid, as well as the frontman of Lars Frederiksen and the Bastards and the Old Firm Casuals. In addition, he currently plays guitar in Oxley's Midnight Runners, Stomper 98, and The Last Resort. He was also briefly a member of the UK Subs in 1991.[1]

Frederiksen joined Rancid in 1993 after the band was searching for a second guitar player and was present on their second album Let's Go. He has produced albums for bands such as Dropkick Murphys, Agnostic Front, The Business, Swingin Utters, Marky Ramone and the Intruders, Anti-Heros, Pressure Point, The Forgotten among others.[2] He mixed GBH's 2010 album entitled Perfume and Piss, as well as Cock Sparrer's 2007 album "Here We Stand" both alongside Michael Rosen.

Frederiksen was raised by his mother, Minna Dapello (née Frederiksen), after his father John left at age three.[3] Minna Dapello was a Danish immigrant who was the only member of her family to survive the Nazi occupation of Denmark, but witnessed their murder.[4]

Frederiksen married his girlfriend Megan in 1998. They divorced, and he married San Francisco yoga instructor Stephanie Snyder with whom had two children together, both boys. In May 2020 Stephanie divorced Frederiksen.[5]

On the 75th episode of That One Time on Tour podcast that aired on October 15, 2019, Frederiksen confirmed that he and Snyder had ended their relationship. He also mentioned that he "always liked the idea of a big family," and that he "plans to have more kids at some point in [his] life" and would be open to adoption. On having more kids, Frederiksen added, "hopefully I can find someone again [whom] I can share that with."[6]

Frederiksen's brother was Robert "Rob" Dapello, a writer for Zero Magazine and a fellow musician, who died in February 2001 from a fatal brain aneurysm.[7] The song "Otherside" off Rancid's 2003 album Indestructible is dedicated to Rob's memory. They were raised in Campbell, California, a city bordering San Jose.[8]

He supports Millwall Football Club, and often has the Millwall lion on his guitar.[9] He is also a San Jose Earthquakes season ticket holder. In January 2014, Lars and The Old Firm Casuals wrote the new team anthem/theme song for the San Jose Earthquakes titled "Never Say Die". Lars called the team the "punkest" team in MLS.[10][11]

"It was emotional," said Frederiksen, who says he was reminded of his mother's struggles as a single parent. "But I was thinking that when people donate toys, it is always the teenagers that get left out. That's when I got Tony Hawk on the phone."[12]

Kids come up to us all the time and say, "We're in a band and we're never going to sign to some major label. We're going to stay independent like you guys. You guys proved you don't need to sign some major label and all that bullshit [to be successful]." That's the most gratifying thing anyone can say to me or to any of us.[13]

Frederiksen appears in several episodes of Tim Armstrong's Tim Timebomb's Rock n Roll Theater as Dante. Lars can also be seen in the documentary film, The Other F Word. Lars is a longtime fan of professional wrestling. He is friends with professional wrestler CM Punk, and featured in the WWE produced documentary CM Punk: Best in the World.[14]

During an appearance on the Wrestling Perspective Podcast, Lars suggested to Ruby Riott she should use the ring name Ruby Soho and assured her that he could also have the song cleared legally for her to use as her entrance theme. The name change was confirmed via a post on Prange's Instagram account. 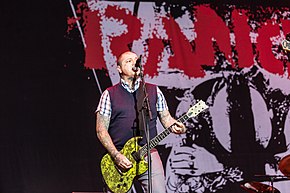 Frederiksen with Rancid in 2017

Lars Frederiksen and the Bastards

Frederiksen on guitar and backing vocals.[18]

Frederiksen on guitar and backing vocals.