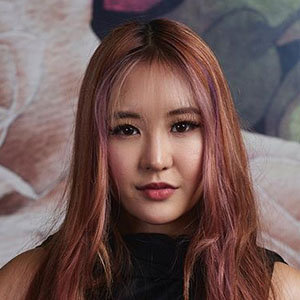 The estimated net worth of Megan Lee is $5 million USD.

Megan Lee (born September 18, 1995) is a Korean-American singer-songwriter and actress best known for her role as Sun Hi Song on Make It Pop and her singing talents on YouTube. From February 2013, Megan Lee was signed to Kim Tae-woo's (lead singer of g.o.d) label, Soul Shop Entertainment up until November 2014.[2][3] Megan Lee was a member of XO-IQ, featured in the Nickelodeon series Make It Pop.[4] She has taken part in season 14 of the American music talent show The Voice, where she was eliminated in the Battle round.

Lee has also written music for K-Pop artists such as Exo's Baekhyun and Girls' Generation's Taeyeon.[5] On May 2019, she released her debut extended play, I Am.[5]

Lee officially began her professional career in acting, singing, and dancing at the age of 10. She has appeared in numerous national commercials including spots for McDonald's, Verizon Wireless, Nintendo (the Nintendo DS), Bratz, Kidz Bop, Wal-Mart, Big Lots, and Trix as well as TV programs such as the Crash TV series, iCarly, Nickelodeon's Kids' Choice Awards, Disney's Get Connected, 3 Minute Game Show & various independent film projects, and most recently, South Korea's popular show, MBC Star Audition - The Great Birth (위대한 탄생) Season 1 (and Season 2) on one of South Korea's main broadcast networks (MBC). On Season 2 of MBC's Star Audition, Lena Park personally selected Megan over a number of other competitors to be Megan's mentor. She also finished in the Top 13 of contestants at the end of Season 2.[6]

Lee is starring in a Nickelodeon show entitled Make It Pop.[7] She is one of the show's three main stars and plays a character named "Sun Hi Song".[8] The series is being co-produced by Nick Cannon.[9][10]

Megan's official debut track during her time on Soul Shop Entertainment was entitled "8dayz" (read as 8 Days), which was released on May 15, 2014.[14] The track features B2ST's Yong Jun-hyung, and is also composed by German composers Andreas Bärtels and Rüdiger Schramm, who also composed a track for veteran K-pop singer Nami.[15]

On November 10, 2014, Megan Lee filed a civil lawsuit with the Seoul District Court against Soul Shop Entertainment requesting nullification of her 5-year contract.[19] Megan, along with her representation, claimed that she was severely verbally abused by some of the members of management, and that intimidation tactics were used to impose their will on her career. She also claimed that a contract was signed on her behalf without her consent, a fraudulent bank account in her name was made without her consent, and that the financial activity regarding her career with Soul Shop was not made transparent as it was promised to her in their initial agreement with the label.[20]

During the second-half of 2018, it was reported that a song, titled 'Psycho', which was sung by EXO's Baekhyun, exclusively during EXO's recent Elyxion concert, was written by Lee. The original piece solely written by Lee, and produced by Zayson, went viral.[5]

Lee also co-wrote "Horizon" for Taeyeon's Japanese extended play, Voice.[5] On May 6, 2019, Lee released a new single, "Me, Myself and I", with its lyric video released simultaneously; the song served as the lead single of her debut extended play, I Am, which was released on May 24.[5]

In 2018, she auditioned to season 14 of the American series The Voice. In an episode broadcast on March 6, 2018, she performed "Killing Me Softly with His Song", with Alicia Keys turning her chair. In the Battles Round broadcast on March 19, 2018, she was confronted with Team Alicia teammate Johnny Bliss both singing "Versace on the Floor" from Bruno Mars. Alicia Keys opted for Bliss and Megan Lee was eliminated from the competition.

Megan is most likely known for her covers of songs which she posts onto YouTube. Among the songs she has covered that have received significant views include a cover of Christina Aguilera's "I Will Be", Bruno Mars' "Lazy Song", Lil Wayne's "How to Love", Kelly Clarkson's "Stronger (What Doesn't Kill you)" and others. She has also covered other songs and collaborated with other YouTube artists, for example, in 2011, she covered "Forget You" by Cee Lo Green with Arden Cho.[21] In 2011, Megan also won 2NE1's "Lonely" Cover Contest with her cover of 2NE1's single "Lonely", and was flown to Korea to meet with the group. She also made a cover of Adele's "Someone Like You" on YouTube with Sungha Jung. In 2012 she won a Cover Contest sponsored by Jason Mraz and Warner Music Korea, and collaborated with Mraz in a duet for his track, "Lucky" which is viewable on YouTube.[22] She has also performed and recorded a number of duets with acoustic guitarist Sungha Jung, covering famous K-pop songs such as "Monster" by BIGBANG.[23]