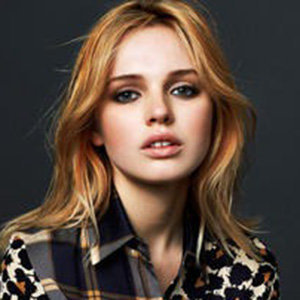 The estimated net worth of Odessa Young is $1 million USD.

Odessa Young (born 11 January 1998) is an Australian actress. She is known for her roles in the 2015 feature films Looking for Grace and The Daughter, the latter of which earned her an AACTA Award for Best Actress in a Leading Role.[1][2] She more recently was cast as Frannie in The Stand and a lead in Shirley.[3]

Young grew up in Australia, where her mother is a writer and her father a musician.[4] She attended a performing arts high school in Sydney, taking part in theater productions.[5] Within two days of turning 18, she relocated from Sydney to Los Angeles, California. Two years later, Young moved to Williamsburg, Brooklyn, New York.[6]

Odessa Young started acting professionally at the age of 11,[7] when she was cast through her drama teacher in the Australian children's show My Place.[7] She acted in television series such as Wonderland and Tricky Business before making the transition into feature film work.[8]

In 2015, she co-starred in the film The Daughter with Geoffrey Rush and Sam Neilll.[9][10] She was cast as "the daughter" after modifying her take on the character to seem less mature than in her first audition.[11] Also in 2015, she acted alongside Radha Mitchell in Looking for Grace, where she played the titular role.[12][13] Later that year, she was dubbed "Australia's brightest rising star" by Elle Magazine.[14] For her role in The Daughter, Young attracted considerable critical acclaim[15] and won Best Actress in a Leading Role at the 2016 AACTA Awards.[16] Her performance in The Daughter also earned her an award for Best Actress from the Australian Film Critics Association.[17]

In 2016, she was in final negotiations to play the female lead in When The Street Lights Go On on Hulu.[18]

In 2017, Young starred as Genevieve in the web series High Life; for her performance, she won an IAWTV Award for Best Lead Actress – Drama.[19] In 2018, she won Best Actress at the 5th annual Vancouver Web Series Festival for her role in the series.[20]

In 2018, she was in the film Assassination Nation, and also the film A Million Little Pieces.[4] Also in 2018, she made her off-Broadway debut in Days of Rage at the Tony Kiser Theater, where she plays the radical Quinn in 1969.[5]

She was cast in The Stand miniseries in 2019.[21] With the Stand, there were four shooting days before lockdown in Vancouver, with shooting picking up again later.[6] With the miniseries released in 2020, she plays Frannie, with a "new coda co-written by King himself" that gives her a different portrayal than the book[22] in the final episode.[23]

In 2020, Young was cast as a hostess in the HBO Max television series Tokyo Vice, to be directed by Michael Mann and written by J. T. Rogers. She was replaced by Rachel Keller[24][25] when she pulled out of the production over scheduling conflicts[26] related to the COVID-19 pandemic.[27] In the June 2020 film Shirley, Young plays Rose,[3] a newly married young woman living in the same house as Shirley Jackson.[28] Vogue named her one of six actors to watch in 2021.[29] For 2021, she was cast in the show Mothering Sunday.[29]