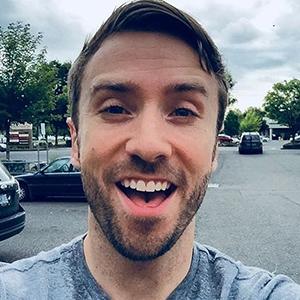 The estimated net worth of Peter Hollens is $2 million USD.


American singer
Not to be confused with Peter Hollins.
Musical artist

Peter James Hollens[2] (born March 4, 1980)[3] is an American singer/songwriter, producer and entrepreneur. He has been involved with a cappella music since 1999 when he and Leo da Silva founded the University of Oregon's a cappella group, On The Rocks, known as the first official collegiate a cappella group in Oregon.[4] He regularly releases new music videos to his YouTube channel. With over 5 million followers and 2.7 million subscribers, his content has received over a billion total views since 2011.

Hollens was born on March 4, 1982, in Ashland, Oregon to James and Deborah (Melone) Hollens.[5] He graduated from the University of Oregon with a Bachelor of Music in Vocal performance. Since his graduation from the University of Oregon, Hollens has become involved with collegiate a cappella,[6] including recording, producing, and judging a cappella competitions throughout the United States. In 2010, he participated in NBC's The Sing Off, working with music director Deke Sharon and receiving acclaim from The Sing-Off judges Shawn Stockman, Nicole Scherzinger and Ben Folds for solo performances leading his group, On The Rocks.[7][8] They were eliminated 6th out of the 10 groups performing.

Hollens records and produces from his home studio in Eugene, Oregon, and also has recorded for Sony and Epic Records. Hollens's recordings include tracks for "The Sing-Off Season 2-Greatest Hits" as well as many collegiate a cappella albums for such groups as On the Rocks, Divisi, Cornell's Chordials, the Duke's Men of Yale and the Whiffenpoofs.[9] He has also recorded Sing-Off Season 2 winners, Committed, the Backbeats, and the Grammy Award-winning group The Swingle Singers.[10]

In 2011, he started his own YouTube channel, mostly posting music videos with multi-tracked a cappella covers. Repeatedly teaming up with other artists, he frequently collaborates with Lindsey Stirling and Taylor Davis. As of March 7, 2020, his channel has over 2.46 million subscribers. To support his musical endeavors, Hollens joined the newly founded crowdfunding platform Patreon in 2013. In an interview in March 2017 he mentions he's become an adviser for Patreon.[11] In 2012 he released his first album.

In 2015, he performed guest lead vocals for Brian Wilson's album No Pier Pressure on the song "Our Special Love".[17]

In 2016, Hollens teamed up with Home Free, the winners of The Sing-Off Season 4, to record an all-vocal arrangement of the hymn "Amazing Grace". "I had the absolute honor of working with Home Free on this one," Hollens states in a video message at the close of the song's YouTube release. "I love these guys, they are so talented and fun. We have worked together once before on a video called "19 You + Me".[18]

Hollens debuted on Broadway in the show "Home For the Holidays, Live on Broadway" which was presented November 17 to December 30, 2017, at the August Wilson Theatre.[19] On December 12, 2017, he was a guest on The Piano Guys live stream called 'Light The World Christmas Concert with The Piano Guys and Friends', in which he made a comment that he is in "Home For the Holidays, Live on Broadway" and would be getting a cab to the theatre.[citation needed]

Hollens is married to Evynne Hollens (née Smith), co-founder of the a cappella group Divisi.[20][21] Evynne has her own YouTube channel, posting music videos, occasionally collaborating with her husband. She co-wrote a musical called "Milagro", which was first performed in 2018.[22] The couple performed in their first Broadway show, Home for the Holidays, in November 2017. They have two sons named Ashland (born 2014)[23] and Saylor (born 2018).[24]