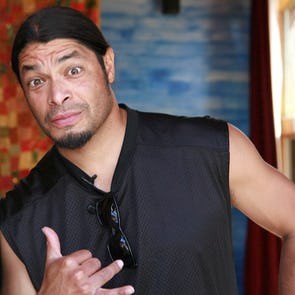 The estimated net worth of Robert Trujillo is $15 million USD.


American bassist (born 1964)
In this Spanish name, the first or paternal surname is Trujillo and the second or maternal family name is Veracruz.
Musical artist

Roberto Agustín Miguel Santiago Samuel Trujillo Veracruz (/truːˈhiːjoʊ/; born October 23, 1964)[1] is an American musician, best known as the bassist for heavy metal band Metallica since 2003. He first rose to prominence as the bassist of crossover thrash band Suicidal Tendencies from 1989 to 1995, while also collaborating with Suicidal Tendencies frontman Mike Muir for funk metal supergroup Infectious Grooves. After leaving Suicidal Tendencies, he performed with Ozzy Osbourne, Jerry Cantrell, and heavy metal band Black Label Society. Trujillo joined Metallica in 2003 and is the band's longest-serving bassist. He was inducted to the Rock and Roll Hall of Fame as a member of Metallica in 2009.

Robert Trujillo was born in Santa Monica, California, on October 23, 1964. He is of Mexican and Native American descent.[2][3] He grew up in Culver City, California,[4] where his father was a teacher at Culver City High School.[citation needed] Trujillo gained an interest in music during his childhood; his mother was a huge fan of soul music, particularly musicians like Marvin Gaye, James Brown, and Sly and the Family Stone.[4] Trujillo stated that "Jaco [Pastorius] was my hero growing up", and that the iconic jazz bassist changed his view of what the instrument could play: "Hearing him was like hearing Eddie Van Halen doing "Eruption" for the first time: You thought, 'What instrument is that?' I loved jazz fusion and branched out from there. But Jaco had an edge that far exceeded his jazz persona. He was funk, he was rock, he was soul. And his whole attitude was punk."[5] He began playing in "a lot of backyard party bands", playing music by Black Sabbath, Ozzy Osbourne, Rush, and Led Zeppelin.[4] He went to jazz school when he was 19 with the intention of becoming a studio musician, but he maintained his passion for rock and metal.[4] 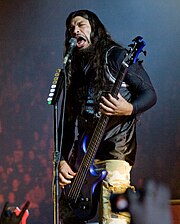 Trujillo performing in the O2 Arena in London, 2008

Trujillo gained prominence when he replaced Bob Heathcote as the bassist for California crossover thrash band Suicidal Tendencies. Initially billed as "Stymee" on the 1989 album Controlled by Hatred/Feel Like Shit...Déjà Vu, Trujillo remained in the band until the mid-1990s. Concurrent to his work with Suicidal Tendencies, Trujillo was a member of the band's side project, Infectious Grooves, along with vocalist Mike Muir.

Trujillo was a member of Ozzy Osbourne's band for a number of years starting in the late 1990s. In contrast to his earlier jazz and funk inspired playing, Osbourne's band was more straightforward to hard rock and metal.[6] Trujillo co-wrote several songs on the Down to Earth album.[6] He was the subject of controversy for re-recording Bob Daisley's bass tracks for reissued versions of Osbourne's first two solo albums Blizzard of Ozz (1980) and Diary of a Madman (1981) after Daisley claimed that he was not paid proper royalties.[7] During this time, Trujillo formed an experimental supergroup, Mass Mental, with then Dub War singer Benji Webbe, whose "ragga-punk-metal" outfit had just disbanded. The band released one studio album in Japan and one live album of their performance in Tokyo before disbanding.[8] Zakk Wylde, a personal friend and bandmate from the Ozzy days, recruited him to play with Black Label Society for a few shows.

Trujillo joined Metallica on February 24, 2003, two years after Jason Newsted resigned. He had previously met and befriended his future bandmates when Suicidal Tendencies supported Metallica during the Nowhere Else to Roam tour in 1993, and again during the Shit Hits the Sheds Tour one year later. Trujillo received one million dollars from the band as an advance for joining Metallica. His audition and hiring as well as his million dollar payment offer appeared in the documentary film Metallica: Some Kind of Monster. As the current bassist for Metallica, he was inducted into the Rock and Roll Hall of Fame alongside all current members of the band, as well as previous bassists Jason Newsted and Cliff Burton.

Trujillo is married and has a son and a daughter.[1][9] Trujillo's wife, Chloé, has created a pyrography design of the Aztec calendar on one of his basses.[10][11][12]

In 2012, Trujillo produced a documentary about jazz bassist Jaco Pastorius titled Jaco, directed by Stephen Kijak and Paul Marchand. The film was named Official Film of Record Store Day 2014 and was released in November 2014.[13][14][15] 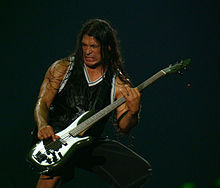 Trujillo is primarily a finger-style player, but sometimes plays with a pick. Trujillo's predecessor in Metallica, Jason Newsted, was predominantly a pick-style player, while Cliff Burton, Newsted's predecessor and bassist on Metallica's first three albums, played finger-style exclusively. Trujillo is known for playing "massive chords"[16] and "chord-based harmonics"[17] on the bass.

Trujillo uses the slap bass technique, seen mostly in his work with Suicidal Tendencies and Infectious Grooves. At many of the shows during Metallica's 2004 Madly in Anger with the World Tour, Trujillo would often play an extended bass solo (dubbed "Jungle Essence" on recordings), which made extensive use of slap bass and other techniques and effects.

For recording purposes, Trujillo uses his own code for writing down bass arrangements. Inspired by an article by Pino Palladino, he developed this during the recording sessions for Jerry Cantrell's Degradation Trip, which, according to Trujillo, had him working from "little hoodrat demos" with nearly inaudible bass.[18]

With Metallica, Trujillo has primarily been playing Warwick Streamer bass guitars, both 5- and 4-strings. His signature model Streamer bass was released in March 2010.[19] He often plays Fernandes Gravity 5-string basses, particularly a model with a silver finish, blue flame decals, and EMG pickups.[20] In addition to his signature Warwick basses, Zon Guitars produce a signature bass model, the Sonus RT.[21] Prior to Metallica, he was most often seen playing Tobias, ESP and MusicMan basses (all 5-strings), as well as a Fender Precision Bass with Black Label Society[22] and Ozzy Osbourne. Trujillo has been seen in concert playing a Yamaha TRB5-P2 5-string bass, a customized green Rickenbacker 4001/4003 4-string bass modified with EMG pickups, various Nash P-Bass Copy guitars,[23][24] and both a classic Fender Precision Bass[25] and Fender Jazz Bass.[citation needed] Trujillo is the custodian of Jaco Pastorius' legendary "Bass Of Doom" (the sunburst fretless 1962 Jazz Bass used by Pastorius on most of his recordings and live appearances).[26] He has performed onstage with Metallica with the instrument.

For amplification, he uses Ampeg amplifiers and cabinets.[27] In 2010, Trujillo collaborated with Jim Dunlop to create his new Icon signature bass strings – these strings are taper-core stainless steel, with a non-tapered B string in gauges 45–130 (5-string).[28] 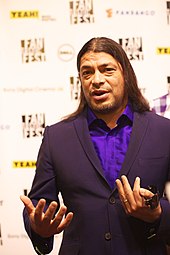 He is a playable character in Tony Hawk's Pro Skater HD when the Pro Skater 3 HD Revert Pack downloadable content is installed.[30]