Skip to content
The estimated net worth of Todd McKenney is $5 million USD.

This article is about Australian entertainer. For the judge from Ohio, see Todd McKenney (politician).

Todd McKenney (born 31 May 1965) is an Australian entertainer. He is best known for portraying Peter Allen in the musical The Boy from Oz and as a judge on Australian television show Dancing with the Stars.

McKenney grew up in Perth, where his father was a jail warden and his mother a dance teacher. They separated when he was 9.[1] He began his entertainment career on a children's television show as Percy Penguin.[1]

McKenney trained in jazz, tap, acrobatics and ballroom dancing. He represented Australia in ballroom and Latin American dancing, and won many international awards.[2]

McKenney has performed on stage since 1983 in productions including 42nd Street, The Pirates of Penzance, La Cage aux Folles, Singin' in the Rain, and Priscilla Queen of the Desert - the Musical.[3] In 1992, he played the role of ballroom dancer Nathan Starkey in Baz Luhrmann's film Strictly Ballroom, alongside his future Dancing with the Stars co-star Sonia Kruger, as well as Paul Mercurio.[4]

McKenney rose to fame in 1998 when he took the lead role of Peter Allen in the Australian production of The Boy from Oz.[1] He performed the role 766 times between 1998 and 2000, however when the production went to Broadway in 2003, Hugh Jackman landed the role over McKenney.[1]

Outside musical theatre, McKenney is best known as the "nasty judge" on Australia's version of Dancing with the Stars.[3] He has appeared on all fifteen seasons of the show since 2004.[5]

McKenney took on his first non-musical role in 2006, starring as Michael Minetti in the Ensemble Theatre production of Richard Alfieri's two-hander play Six Dance Lessons in Six Weeks with Nancye Hayes at the Playhouse Theatre in the Sydney Opera House.[6][7] The play remains the most successful in the Ensemble Theatre's history, and the pair reprised these roles ten years later at the Concourse Theatre, Chatswood, reuniting with for her final directorial role.[8] McKenney performed his Casting Couch production at the Ensemble's Kirribilli premises in 2016, interviewing Queenie van de Zandt, Georgie Parker, and Simon Burke in different performances.[9] 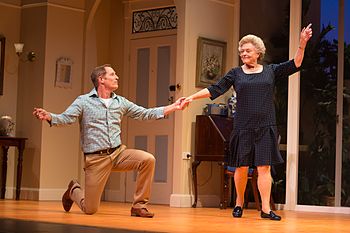 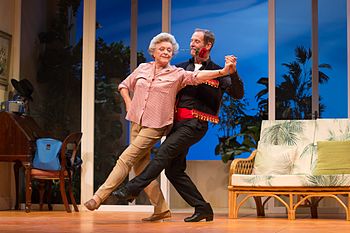 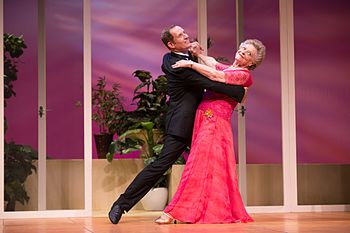 McKenney and Hayes dancing together in the 2016 Ensemble Theatre production of Six Dance Lessons in Six Weeks (Photos by Clare Hawley, taken at the Concourse Theatre, Chatswood)

In 2006, McKenney hosted the television game show You May Be Right, which was cancelled after a month on air.[10] He hosted the breakfast program on Sydney radio station Mix 106.5 with Dancing with the Stars co-host Sonia Kruger, as well as Andy Grace, from January 2008 until September 2009.

On 19 May 2010 and on 27 December 2010, McKenney guest co-hosted The Morning Show alongside Kylie Gillies, while regular male presenter Larry Emdur was on holidays.

In 2011 McKenney portrayed Lord Evelyn Oakley in a limited showing of Anything Goes in Melbourne, alongside Amanda Harrison.[11] In 2012, he played the role of Rooster in the hit musical Annie alongside Anthony Warlow, Nancye Hayes and Alan Jones.[12]

McKenney plays Teen Angel in the 2013-2014 Australian National Touring Company production of the hit musical Grease, starring alongside Bert Newton, John Paul Young, Rob Mills, and Gretel Scarlett. Although he is on stage for less than four minutes,[3] critics have said he "steals the show."[13][14]

In 2019 he headlined a production of Barnum (musical).

McKenney is openly gay.[16] He has a daughter (who was conceived via IVF), Charlotte Wood, who lives in Melbourne with her mother, Anne Wood.[2] McKenney has said his first girlfriend, at twelve years of age, was dancer and presenter Sonia Kruger.[17]