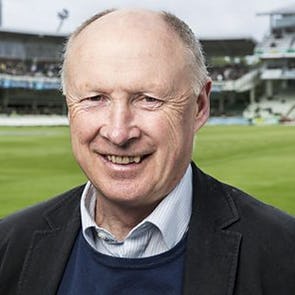 The estimated net worth of Vic Marks is $1 million USD.

An off spin bowler, Marks played in six Test matches and thirty four One Day Internationals for England. His entire county cricket career was spent with Somerset, spanning the period between 1975 and 1989. Marks also played for Oxford University whilst a student and had one season playing in Western Australia, winning the Sheffield Shield 1986–87.

After retiring as a player, Marks became a cricket journalist. He writes match reports and opinion pieces for The Guardian and The Observer newspapers, and frequently appears on BBC Radio's Test Match Special as a summariser.

Marks was born on 25 June 1955 in Middle Chinnock, Somerset. He was educated at Blundell's School and Oxford University, for whom he played cricket between 1975 and 1978 (alongside Imran Khan and Chris Tavaré, and opposite Peter Roebuck of Cambridge University, subsequently Marks' captain at Somerset). Marks captained Oxford University in 1976 and 1977.

Marks made his first-class debut for Somerset in the 1975 County Championship. Five years later he made his debut for the national team, in an ODI against the West Indies. His Test debut was in 1982 against Pakistan.

He went on to play six Test matches,[2] and was an important member of the ODI squad during the 1980s, appearing thirty four times and taking forty four wickets at a bowling average of 25.79. His haul of five for 20 for England against New Zealand in 1984 was, for some[quantify] years, England's best bowling return in One Day Internationals;[3] it remains the best one-day figures by an England spin bowler. Marks was the first England bowler to take two ODI five-wicket hauls (having previously taken five wickets against Sri Lanka in 1983). This feat was subsequently emulated by the seam bowlers Darren Gough, Mark Ealham and Andrew Flintoff; the first spin bowler to equal Marks' record was Adil Rashid in 2019.

As a cricketer he was popular and well-liked; Wisden editor, Matthew Engel, labelled him "a mild, nervy, self-deprecating farm boy with an Oxford degree and no enemies". This was an unusual distinction in the Somerset side of the 1980s, where three explosive personalities, Viv Richards, Joel Garner and Ian Botham, had a dispute with captain Peter Roebuck, which resulted in Somerset (under the influence from Roebuck and new club Secretary Tony Brown) opting not to renew Richards' and Garner's contracts in 1986, and Botham leaving the club in protest.

The cricket correspondent Colin Bateman noted that "in typical self-deprecating style, Vic Marks entitled one of his books, Marks Out of XI. He was probably out of the England XI slightly too often. While he was never a fashionable cricketer, he was a determined and highly effective off-spinner-cum-batsman whose Test figures stand comparison with those often picked ahead of him, such as Geoff Miller and Eddie Hemmings".[2]

After retiring as a professional cricketer, he turned his hand to journalism and broadcasting, and is now a regular summariser on Test Match Special. He writes regularly about cricket and occasionally rugby union for The Observer newspaper as their Cricket Correspondent, and also for The Guardian.[4]

He is currently[when?] Chairman of Cricket at Somerset.