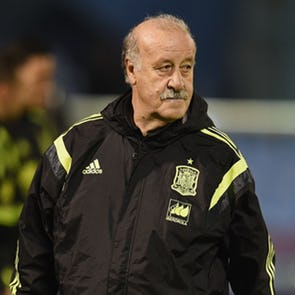 The estimated net worth of Vicente Del Bosque is $4 million USD.


Spanish footballer and manager
In this Spanish name, the first or paternal surname is Del Bosque and the second or maternal family name is González.

Vicente del Bosque González, 1st Marquess of Del Bosque (Spanish pronunciation: [biˈθente ðel ˈβoske ɣonˈθaleθ]; born 23 December 1950) is a Spanish retired football manager and former player. He is regarded as one of the greatest managers of all time[1] and is to date the only football manager to have won the World Cup, the Champions League, the European Championship and the Intercontinental Cup.

After taking over from Luis Aragonés – who had led Spain to European success at UEFA Euro 2008 – del Bosque went on to lead the national team to win their first-ever FIFA World Cup in 2010, and then to retain their European Championship in 2012. Del Bosque coached Real Madrid from 1999 to 2003, which was one of the most successful periods in the club's modern era.

During his playing career, del Bosque made over 400 appearances for Real Madrid, winning five La Liga titles and four Copas del Rey. He played internationally with the senior Spain national team on 18 occasions.[2]

Internationally, del Bosque received 18 caps with the Spain national team, scoring one goal.[3] He appeared for Spain at UEFA Euro 1980,[4] which would be a disappointing for Spain exiting at the group stage of the competition.

Del Bosque served at Real Madrid since 1994 and rose through the ranks at the club; however, he only first managed Madrid for a couple of months in 1994 after the sacking of Benito Floro and before the appointment of Jorge Valdano. He would again manage Real for two games in 1996, while he was the youth team coach, after Jorge Valdano was sacked and before Arsenio Iglesias took the job until the end of that season. But in 1999–2000, the club management decided to give him the full-time job after difficulties with their coach, John Toshack, with del Bosque taking over in November 1999.

In his four seasons in charge, del Bosque ushered the club through one of its most successful spells in modern history, having steered the club to two UEFA Champions League titles in 2000 and 2002, two domestic La Liga titles in 2001 and 2003, a Supercopa de España in 2001, a UEFA Super Cup in 2002, the Intercontinental Cup in 2002 as well as finishing in the last four of the UEFA Champions League every year he was in charge. Not since the great Madrid side of the 1950s and 1960s that had Alfredo Di Stéfano and Ferenc Puskás did the club succeed so consistently. Del Bosque was credited with a humble, patient and unassuming style[5] which saw him manage the club as it underwent a policy during Florentino Pérez's tenure as club President that was known as Los Galácticos, where the world's best and most marketable stars were signed for the club beginning with Luís Figo and including David Beckham, Zinedine Zidane and Ronaldo. In the del Bosque era Real managed 104 wins out of a possible 186 in his time as coach of Madrid.[5] Despite the level of success, many players – in particular the so-called Galácticos – were bought without the input of del Bosque amid often made allegations that the Real Madrid hierarchy (in particular Pérez and general manager Jorge Valdano) had more control over transfer policy, team selection and other aspects of club that minimised the level of control del Bosque had during his time as manager.[6]

Real Madrid decided not to renew Del Bosque's contract in 2003,[5] just a day after he won the club its 29th Liga title and a week after the club signed David Beckham. Del Bosque was offered the post of technical director[7] but turned it down, leading to many suggestions in the Spain's media that there was a much rumoured political split at the club involving del Bosque and several players, especially captain Fernando Hierro (who was asked to leave the club in the summer of 2003), on one side, while Valdano and Pérez wielded the axe of control to in their words, "shake up the team," on the other. Pérez said in an interview with BBC Sport, "del Bosque was showing signs of exhaustion. I want to be sincere about this – our belief that he was not the right coach for the future."

The BBC article states: "It is a strange tale from start to finish – how the shy, mustachioed man from Salamanca came to be in charge of the most expensive and talented bunch of footballers in the modern game, won the biggest trophies on offer and then got the boot in favour of a man yet to be named. With the Real superstars, del Bosque was extremely popular – partly because he was happier to let them get on with it. Cool as a cryogenically-frozen cucumber, he managed to avoid confrontations with his charges, despite the stellar egos in the squad, and never once lost his calm in front of the media."

Since Del Bosque's departure, Real Madrid changed seven coaches in the four-year period since his departure and did not win any major trophies until they won the La Liga title in 2007, under new coach Fabio Capello (who was also sacked afterwards). They had also been defeated in the Round of 16 in the Champions League every year since the 2004–05 season (one year after Del Bosque was sacked), until the 2010–11 Champions League season, which saw Real Madrid defeat Lyon in the Round of 16 under new manager José Mourinho. It would take until Real Madrid had manager Carlo Ancelotti, during the 2013–14 campaign, before the club won another Champions League title.

After Iñaki Sáez resigned in the wake of a terrible performance at UEFA Euro 2004, which saw Spain having their worst result in the tournament since 1988, del Bosque was approached as a possible manager of the national side. He was not interested in the job, however, and the job was subsequently given to Luis Aragonés.

With Beşiktaş, del Bosque arrived in Turkey to much fanfare and hope, but failure to deliver results saw him get the sack towards the tail end of the 2004–05 season.

After Mexico were eliminated by Argentina in the 2006 FIFA World Cup, del Bosque was approached with an offer to become their manager, but declined.

During the 2007 Real Madrid crisis, del Bosque spoke on the line saying that the departure of Ronaldo was a mistake, and he was one of the candidates to replace Fabio Capello as manager of the team. Bernd Schuster, however, was awarded the job on 9 July 2007.

Spain under del Bosque began their 2010 FIFA World Cup qualification campaign successfully, defeating Bosnia and Herzegovina 1–0 with a goal from David Villa. Spain defeated Armenia 4–0 three days later with two goals coming from Villa, and one each from Joan Capdevila and Marcos Senna, with a notable debut from Bojan, coming on as a substitute and defeating rumours that he will swap allegiances to Serbia. This win secured the Spaniards a first place spot in their group with six points. The next round saw Spain defeat Estonia 3–0, then, four days later, beat Belgium 2–1 away – an 88th-minute strike from Villa (his fifth of the campaign) earning them the win. This result maintained their 100% start to the qualifying campaign.

On 9 June 2009, in a friendly against Azerbaijan in which Spain won 6–0, del Bosque became the first manager in all of football history to win his first ten games as debut manager of a national team,[citation needed] the previous record being nine held by João Saldanha of Brazil. The record currently stands at 13 successive victories,[citation needed] with the last winning match being a 2–0 win against South Africa in the 2009 Confederations Cup, followed by a 2–0 defeat in the semifinal stage of the same competition against United States.

On 14 October 2009, Spain joined the very small number of teams to have won all their World Cup qualifying games in a single campaign, achieving a record-breaking ten wins in ten games.[10]

In Spain's first game of the 2010 FIFA World Cup on 16 June, they lost 1-0 to Switzerland.[11] Spain bounced back and won group H by winning the next two games. They faced Portugal in the Round of 16, winning 1–0, and defeated Paraguay in their quarter-final match, again by 1–0. Spain then defeated Germany in the semi-final on 7 July 2010, winning 1–0, allowing them to reach their first World Cup final.[12] In the final against the Netherlands, he led his team to victory after a goal scored in extra time by Andrés Iniesta.[13] Upon this triumph, he became the oldest coach to win the World Cup.

On 1 July 2012, del Bosque led Spain to victory at Euro 2012, hosted by Poland and Ukraine.[14] Spain defeated Italy 4–0 in the final in Kiev to win a second consecutive European championship.[15]

Del Bosque at a 2013 press conference

In the 2013 FIFA Confederations Cup held in Brazil, Spain advanced to the final, played against Brazil; but suffered a heavy 3–0 defeat. A goal from Neymar and a brace from Fred saw a heavy burden landing on del Bosque and his type of football tactics he used, tiki-taka.

In the 2014 FIFA World Cup, del Bosque and his team posted their worst finish in the finals since the World Cup in France in 1998 through being eliminated during the group stage following a 5–1 defeat to the Netherlands and a 2–0 defeat to Chile, despite a 3–0 win over Australia. The heavy opening defeat to the Netherlands marked the first time Spain had conceded 5 or more goals in an international game since a 6–2 defeat to Scotland in 1963, and only the second time they had conceded 5 or more goals in a World Cup game, having done so before in their 6–1 defeat to Brazil in 1950, which incidentally was also held in Brazil. The result was also the biggest margin of defeat by a defending champion at a World Cup. Furthermore, despite a 3–0 win rounding of their campaign following the 2–0 defeat to Chile, Spain's final standing of 23rd out of the 32 entered teams was their worst-ever finish at a World Cup. After this, he announced that he would resign as Spain's manager, but there was no reaction from the RSFF.

Del Bosque announced his intentions to resign as the Spain national team coach following UEFA Euro 2016.[16] On 14 June 2015, he reached 100 matches as Spain coach in a UEFA Euro 2016 qualifying win over Belarus in Barysaw.[17]