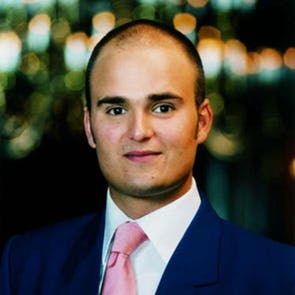 The estimated net worth of Albert Von Thurn Und Taxis is $1.5 billion USD.


Prince of Thurn and Taxis

Albert, 12th Prince of Thurn and Taxis (Albert Maria Lamoral Miguel Johannes Gabriel Fürst von Thurn und Taxis;[needs IPA][1] born 24 June 1983), is a German aristocrat, businessman, and race car driver.[2][3]: 540 [4] He has been listed as the world's youngest billionaire many times since his father's death in 1990,[5] first appearing on the list when he was age eight.[2]

Through descent from king Miguel I of Portugal, Albert is related to several reigning hereditary heads of state in Europe. He also descends from the dynasties of Wittelsbach, Saxe-Coburg-Gotha, Braganza and the House of Habsburg-Lorraine.[3]: 536–540, 778 [4] The House of Thurn und Taxis is a German family whose fortune derives from the appointment of an ancestor, Leonhard von Taxis, as hereditary postmaster general of the Holy Roman Empire in 1595.[4] Albert's father preceded him as the head of this family, which has several branches.[4] The family of Thurn und Taxis remains well known as owners of breweries[6] and former builders of castles.[5] The family seat is Saint Emmeram's Abbey.

His father, Johannes, 11th Prince of Thurn and Taxis, an internationally renowned boulevardier, died in 1990 when Albert was seven years old, leaving the young boy to inherit a US$3 billion fortune and US$500 million in debts.[5] His mother, Gloria (née Countess von Schönburg-Glauchau), a popular media figure since marriage to his 53-year-old father as a 20-year-old, was instrumental in preserving the family fortune until Albert became of legal age to take over its management.[5] He has two older sisters: Princess Maria Theresia and Princess Elisabeth.[5]

Thurn und Taxis completed his high school education in Rome and then, after his military service, he studied economics and theology at the University of Edinburgh.[citation needed]

In 2008 Albert was included as 11th on the list of the Forbes Magazine's List of The 20 Hottest Young Royals as compiled by Forbes magazine.[2]

He is an enthusiastic racing driver, vice-champion (2007/2008) and champion (2010) of the German GT Championship ADAC GT Masters with the German Team Reiter Engineering.[7]

He embarked on a career in rallying in 2009, competing in the European Rally Championship since 2016.[8]