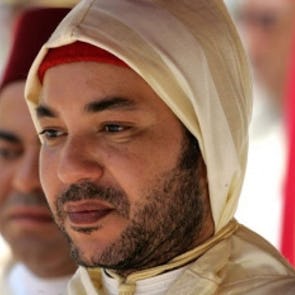 The estimated net worth of King Mohammed VI is $2.5 billion USD.

Mohammed VI (Arabic: محمد السادس‎; Berber languages: ⴰⴳⵍⵍⵉⴷ ⵎⵓⵃⴰⵎⵎⴷ ⵙⴷⵉⵙ agllid muhammd sdis; born 21 August 1963)[1] is King of Morocco. He belongs to the Alaouite dynasty and ascended to the throne on 23 July 1999 upon the death of his father, King Hassan II.[2]

The king initially introduced reforms to grant women more power.[3] Leaked diplomatic cables from WikiLeaks have alleged extensive corruption in the court of King Mohammed VI, implicating the king and his closest advisors.[4] Widespread disturbances in 2011, a Moroccan element of the Arab Spring, protested against corruption and urged the need for political reform. In response, King Mohammed VI promulgated a program of reform and introduced a new constitution. These reforms were passed by a public referendum on 1 July 2011.[5]

The king's net worth has been estimated at between US$2.1 billion[6] and over US$5 billion,[7][8] and, according to the American business magazine Forbes, he was the richest king in Africa in 2014, and the 5th richest king in the world.[9]

Mohammed VI was the second child and oldest son of Hassan II and his secondary wife, Lalla Latifa Hammou.[10] On the day of his birth, Mohammed was appointed Heir Apparent and Crown Prince.[citation needed] His father was keen on giving him a religious and political education from an early age; at the age of four, he started attending the Quranic school at the Royal Palace.[1]

Mohammed VI completed his first primary and secondary studies at Collège Royal and attained his Baccalaureate in 1981, before gaining a bachelor's degree in law at the Mohammed V University at Agdal in 1985.[11] His research paper dealt with "the Arab-African Union and the Strategy of the Kingdom of Morocco in matters of International Relations".[1] He has also frequented the Imperial College and University of Rabat.[citation needed] He was furthermore appointed president of the Pan Arab Games, and was commissioned a Colonel Major of the Royal Moroccan Army on 26 November 1985. He served as the Coordinator of the Offices and Services of the Royal Armed Forces until 1994.[citation needed]

In 1987, Mohammed VI obtained his first Certificat d'Études Supérieures (CES) in political sciences, and in July 1988 he obtained a Diplôme d'Études Approfondies (DEA) in public law.[1] In November 1988, he trained in Brussels with Jacques Delors, then-President of the European Commission.[1]

Mohammed VI obtained his PhD in law with distinction on 29 October 1993 from the French University of Nice Sophia Antipolis for his thesis on "EEC-Maghreb Relations".[1] On 12 July 1994, he was promoted to the military rank of Major General, and that same year he became president of the High Council of Culture and Commander-in-Chief of the Royal Moroccan Army.

The New York Times reported that prior to ascending to the throne, Mohammed VI "gained a reputation as a playboy during the years he spent waiting in the wings, showing a fondness for fast cars and nightclubs."[12]

On 23 July 1999, Mohammed VI succeeded his father as king and was enthroned in Rabat on 30 July.[citation needed]

Criticism of the king's spending

Morocco ranks 121st in the United Nations’ human development index. Ten per cent of the population live in absolute poverty. In the midst of the COVID-19 pandemic, Mohammed VI was reported to have purchased an €80 million mansion in Paris, close to the Eiffel Tower, from the Saudi Royal family.[13]

Royal involvement in business is a major topic in Morocco, but public discussion of it is sensitive. The US embassy in Rabat reported to Washington in a leaked cable that "corruption is prevalent at all levels of Moroccan society".[4] Corruption allegedly reaches the highest levels in Morocco, where the business interests of Mohammed VI and some of his advisors influence "every large housing project," according to WikiLeaks documents quoted in The Guardian newspaper.[14] The documents released by the whistleblower website also quote the case of a businessman working for a US consortium, whose plans in Morocco were paralysed for months after he refused to join forces with a company linked with the royal palace. Decisions on big investments in the kingdom were taken by only three people, the documents quote a company executive linked to the royal family as saying. The three are the king, his secretary Mounir Majidi, and the monarch's close friend, adviser and former classmate Fouad Ali Himma, the executive said at a meeting with potential investors in a Gulf country. This corruption especially affects the housing sector, the WikiLeaks documents show.[15]

In April 2016, Mounir Majidi, the personal secretary of Mohammed VI, was named in the Panama Papers.[16][17]

Mohammed VI with U.S. Secretary of State John Kerry in 2014 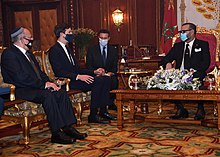 Joint U.S.-Israeli delegation met with Mohammed VI during visit to Rabat on 22 December 2020

Shortly after he ascended to the throne, Mohammed VI addressed his nation via television, promising to take on poverty and corruption, while creating jobs and improving Morocco's human rights record. His reformist rhetoric was opposed by Islamist conservatives, and some of his reforms angered fundamentalists. In February 2004, he enacted a new family code, or Mudawana, which granted women more power.[3]

In December 2020, Mohammed VI agreed to normalize relations with Israel on the condition that the United States will recognize Western Sahara as under Moroccan soveigrenty. The deal will include direct flights between the two nations.

Mohammed VI also created the so-called Instance Equité et Réconciliation (IER), which was tasked with researching human rights violations under Hassan II. This move was welcomed by many as promoting democracy, but was also criticized because reports of human rights violations could not name the perpetrators. According to human rights organisations, widespread abuses still exist in Morocco.[18][19][20] The 2011 Moroccan protests were motivated by corruption and general political discontentment, as well as by the hardships of the global economic crisis.

In a speech delivered on 9 March 2011, he said that parliament would receive "new powers that enable it to discharge its representative, legislative, and regulatory mission". In addition, the powers of the judiciary were granted greater independence from the king, who announced that he was impaneling a committee of legal scholars to produce a draft constitution by June 2011.[21] On 1 July, voters approved a set of political reforms proposed by Mohammed VI.

The reforms consisted of the following:[5]

In January 2017, Morocco banned the manufacturing, marketing and sale of the burqa.[34]

The 20 February movement called and resulted in partial reforms.

Protests broke out in Rabat, the capital of Morocco, on 2 August 2013, after Mohammed pardoned 48 jailed Spaniards, including a pedophile who had been serving a 30-year sentence for raping 11 children aged between 4 and 15.[35]

It was also revealed that amongst the pardoned figured a drug trafficking suspect, who was released before standing trial.[36] He had resisted arrest using a firearm.[36] There was, Antonio Garcia, a recidivist drug trafficker arrested in possession of 9 tons of Hashish in Tangiers and sentenced to 10 years.[37] Some media claimed that his release embarrassed Spain.[37]

Mohammed is Morocco's leading businessman and banker.[38] In 2015, he was estimated by Forbes magazine to be worth US$5.7bn[7] although in 2019 Business Insider quoted a figure of just US$2.1 billion.[6] The Moroccan Royal Family, meanwhile, has one of the largest fortunes in the world.[39] Together, they hold the majority stakes in the Société Nationale d'Investissement (SNI), which was originally state-owned but was merged in 2013 with Omnium Nord Africain (ONA Group), to form a single holding company that was taken off the Casablanca Stock Exchange—resulting in the scrapping of an equivalent of 50 billion Dirhams Marketcap (~US$6 billion).[40] SNI has a diverse portfolio consisting of many important businesses in Morocco and operating in various sectors such as; Attijariwafa Bank (banking), Managem (mining), Onapar, SOMED (tourism/real-estate and exclusive distributor of Maserati), Wafa Assurance (insurance), Marjane (hypermarket chain), Wana-Inwi (telecommunications), SONASID (Siderurgy), Lafarge Maroc (cSopriam (exclusive distributor of Peugeot-Citroën in Morocco), Renault Maroc (exclusive distributor of Renault in Morocco) and Nareva (energy).[41][42] SNI also owns many food-processing companies and is currently in the process of disengaging from this sector.[41] Between mid-2012 and 2013 SNI sold; Lessieur, Centrale Laitière, Bimo and Cosumar to foreign groups for a total amount of ~$1.37 billion (11.4 billion Dirhams including 9.7 billion in 2013 and 1.7 in 2012).[41]

SNI and ONA both owned stakes in Brasseries du Maroc, the largest alcoholic beverages manufacturer and distributor of brands such as Heineken in the country.[43]

Mohammed is also a leading agricultural producer and land owner in Morocco, where agriculture is exempted from taxes.[41] His holding company "Siger" has shares in the large agricultural group "Les domaines agricoles" (originally called "Les domaines royaux", now commonly known as "Les domaines"), which was founded by Hassan II.[41] In 2008, Telquel estimated that "Les domaines" had a revenue of $157 million (1.5 billion Dirhams), with 170,000 tons of citrus exported in that year.[41] According to the same magazine, the company officially owns 12,000 hectares of agricultural lands.[41] "Chergui", a manufacturer of dairy products, is the most recognizable brand of the group.[41] Between 1994 and 2004, the group has been managed by Mohammed VI's brother-in-law Khalid Benharbit, the husband of Princess Lalla Hasna.[41] "Les domaines" also owns the "Royal Golf de Marrakech", which originally belonged to Thami El Glaoui.[41]

His palace's daily operating budget is reported by Forbes to be $960,000—which is paid by the Moroccan state as part of a 2.576 billion Dirhams/year budget as of 2014[44]—with much of it accounted for by the expense of personnel, clothes, and car repairs.[39]

Mohammed has one brother, Prince Moulay Rachid, and three sisters: Princess Lalla Meryem, Princess Lalla Asma, and Princess Lalla Hasna. The New York Times noted "conflicting reports about whether the new monarch had been married on Friday night, within hours of his father's death [in 1999]... to heed a Moroccan tradition that a King be married before he ascends the throne." A palace official subsequently denied that a marriage had taken place.[12]

On 21 March 2002, Mohammed married Salma Bennani (now H.R.H. Princess Lalla Salma) in Rabat.[citation needed] Bennani was granted the personal title of Princess with the title of Her Royal Highness on her marriage. They have two children: Crown Prince Moulay Hassan, who was born on 8 May 2003, and Princess Lalla Khadija, who was born on 28 February 2007.[3]

Mohammed's birthday on 21 August is a public holiday,[45] although festivities were cancelled upon the death of his aunt in 2014.[46]

Mohammed has received numerous honours and decorations from various countries, some of which are listed below.