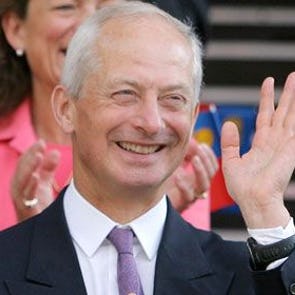 The estimated net worth of Hans Adam II is $3.5 billion USD.

Hans-Adam II (Johannes Adam Ferdinand Alois Josef Maria Marco d'Aviano Pius; born 14 February 1945) is the reigning prince of Liechtenstein. He is the son of Franz Joseph II, Prince of Liechtenstein (1906–1989) and his wife, Countess Georgina von Wilczek (1921–1989). He also bears the titles Duke of Troppau and Jägerndorf, and Count of Rietberg. Hans-Adam is the richest monarch in Europe.[1] 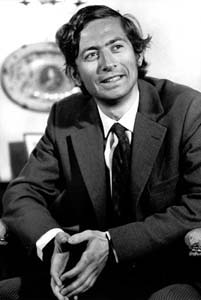 He was born on 14 February 1945 in Zürich, Switzerland, as the eldest son of Prince Franz Joseph II and Princess Gina of Liechtenstein,[2] with his godfather being Pope Pius XII. His father had succeeded as Prince of Liechtenstein in 1938 upon the death of his childless grand-uncle, Prince Franz I, and Hans-Adam was thus hereditary prince from birth.

In 1969, Hans-Adam graduated from the University of St. Gallen with a Licentiate (equivalent to a master's degree) in Business and Economic Studies.[2]

In 1984, Prince Franz Joseph II, while legally remaining head of state and retaining the title of sovereign prince, formally handed the power of making day-to-day governmental decisions to his eldest son as a way of beginning a dynastic transition to a new generation. Hans-Adam formally succeeded as Prince of Liechtenstein upon the death of his father on 13 November 1989.[3]

A referendum to adopt Hans-Adam's revision of the constitution to expand his powers passed in 2003. The prince had threatened to leave the country if the referendum did not result in his favour.[4]

On 15 August 2004 Hans-Adam formally handed the power of making day-to-day governmental decisions to his eldest son, the Hereditary Prince Alois, as a way of beginning a dynastic transition to a new generation. Legally, Hans-Adam remains the head of state.[5] His father did the same for him on 26 August 1984.

In July 2012 the people of Liechtenstein overwhelmingly rejected by referendum a proposal to curtail the political power of the princely family. A few days before the vote, Crown Prince Alois announced he would veto any relaxing of the ban on abortion, also up for referendum. Turnout collapsed and 76% of those voting in the first referendum supported the Prince's power to veto the outcome of future referendums.[6] Legislators, who serve on a part-time basis, rose in the prince's defence on 23 May, voting 18 to 7 against the citizens' initiative.[7]

Hans-Adam owns LGT banking group and has a family fortune of $US7.6 billion and a personal fortune of about $US4 billion,[8] making him one of the world's richest heads of state, and Europe's wealthiest monarch.[9] He owns an extensive art collection, much of which is displayed for the public at the Liechtenstein Museum in Vienna.

The Prince is an honorary member of K.D.St.V. Nordgau Prag Stuttgart, a Catholic students' fraternity that is a member of the Cartellverband der katholischen deutschen Studentenverbindungen.

The Prince donated $12 million in 2000 to found the Liechtenstein Institute on Self-determination (LISD) at Princeton University's Princeton School of Public and International Affairs.[10][11] In his childhood he joined the Pfadfinder und Pfadfinderinnen Liechtensteins in Vaduz.[12] He is also a former member of the Viennese Scout Group "Wien 16-Schotten".[13] He is a member of the World Scout Foundation.[14]

Hans-Adam has written the political treatise The State in the Third Millennium (ISBN 9783905881042), which was published in late 2009. In it, he argues for the continued importance of the nation-state as a political actor. He controversially tried to patent millennia-old native foods like Basmati rice through an American patent and succeeded but withdrew after concerns raised by India, Bangladesh and Pakistan.[citation needed][15] He makes the case for democracy as the best form of government, which he sees China and Russia as in transition towards although the path will be difficult for these nations. He also declared his role in a princely family as something that has legitimacy only from the assent of the people. He stated that government should be limited to a small set of tasks and abilities, writing that people "have to free the state from all the unnecessary tasks and burdens with which it has been loaded during the last hundred years, which have distracted it from its two main tasks: maintenance of the rule of law and foreign policy".[16] 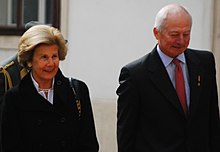 In an interview, recorded in November 2010, Hans-Adam said that he saw certain problems with aspects of the US Constitution, such as the lack of direct democracy. He also said, "I am sitting here and that's because Americans saved us during World War II and during the Cold War. So I am very grateful to them."[citation needed]

Hans-Adam offered a major contribution to the study of self-determination in the foreword to a "Sourcebook, on Self-Determination and Self-Administration", edited by Wolfgang F. Danspeckgruber and Sir Arthur Watts, ISBN 1-55587-786-9, 1997; and in the Encyclopedia Princetoniensis.[17]

See also: List of honours of the Liechtensteiner princely family by country