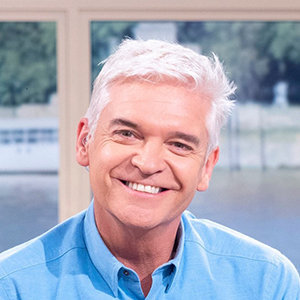 The estimated net worth of Phillip Schofield is $12 million USD.


English broadcaster and television personality
This article is about the television presenter. For the medieval historian, see Phillipp Schofield.

Schofield was born in Oldham, Lancashire.[2] He grew up in Newquay, Cornwall, where he attended Trenance Infant School and Newquay Tretherras School.[3][4] When he was 15, his first foray into media was a Sunday show on Hospital Radio Plymouth.[3]

After many years of writing letters to the BBC, at 17, Schofield took up the position of bookings clerk and tea boy for BBC Radio at Broadcasting House in London, where he was, at the time, the youngest employee.[3]

Aged 19, Schofield moved with his family to New Zealand, where he made his television debut as the initial presenter of the youth music programme Shazam! on 23 February 1982.[5] He also spent two years working for the Auckland-based station Radio Hauraki.[3]

In 1985, he returned to Britain, where he became the first in-vision continuity presenter for Children's BBC on weekdays for two years from September 1985 in what was known as the 'Broom Cupboard'.[6][3] He left to present Going Live! on Saturday mornings between September 1987 and April 1993.[3] From 1988 to 1991, he was the host of the Smash Hits Poll Winners Party, a pop-magazine awards show.

In the early 1990s, Schofield moved to adult-orientated television with various programmes for ITV, such as Schofield's Quest, Schofield's TV Gold and Ten Ball. From 1994 to 1997, he presented Talking Telephone Numbers for five series and in 1996 he hosted a show about remarkable coincidences called One in a Million. He co-authored the book that came out of the series.

In the following decade, Schofield presented the National Lottery Winning Lines programme for BBC One between June 2001 and October 2004. And between 2002 and 2006, he co-hosted the BBC quiz show Test the Nation with Anne Robinson. In July 2006, he signed an exclusive two-year contract with ITV, reported to have been worth £5 million. The exclusive deal also meant he could no longer present Test the Nation and was replaced by Danny Wallace.[7]

Since 2002, Schofield has been a presenter on the ITV daytime show This Morning replacing John Leslie with Fern Britton until 2009 and with Holly Willoughby who replaced Britton in September that year. In May 2008, Schofield's father, Brian, died from a long-standing heart condition,[citation needed] which led to Schofield taking a break from presenting This Morning. John Barrowman stood in for him until his return.

Starting in 2005, Schofield presented two series of Have I Been Here Before?, a daytime programme where a celebrity attempted to use regression to get in touch with a previous life.

Schofield presented Dancing on Ice on ITV with Holly Willoughby from 2006 until 2011 and Christine Bleakley from 2012 until 2014. It was announced in the summer of 2013 that Dancing on Ice was to come to an end following the 2014 series.[9][10] Schofield returned to co-present the show in 2018 following ITV's choice to reboot the series after four years away.

From 2009 until 2015, he presented the primetime game show The Cube. Schofield returned to present the show in 2020 following ITV's choice to reboot the series after five years away. He also hosted A Night of Heroes: The Sun Military Awards with Amanda Holden from 2009 until 2014.

In April 2011 and June 2012, Schofield co-hosted ITV's coverage of the Royal Wedding and the Queen's Diamond Jubilee with Julie Etchingham.

In December 2014, he undertook a live 24-hour TV marathon to raise money for Text Santa,[14][15] where, as well as appearing on This Morning, he appeared on various other programmes throughout the day, including being a guest panellist on Loose Women.

In 2016, he travelled to South Africa with his wife, as part of a series of short clips for This Morning. Following this, ITV aired a 3x30 minute episodes in a primetime slot, called Schofield's South African Adventure. Since March 2017, he has presented 5 Gold Rings, a new game show format for ITV.[17][18] In 2017, Schofield presented three-part factual series How To Spend It Well at Christmas with Phillip Schofield in which he tested the latest must-have festive gifts.[19]

While working as presenter of Going Live!, Schofield was also broadcasting on BBC Radio 1 with a Sunday show (also called Going Live). When Radio 1 made the switch from medium wave to full use of FM stereo in 1988, Schofield was one of the presenters chosen to help with the launch.[citation needed]

Schofield tried his hand at theatre and took over the role of Joseph in Joseph and the Amazing Technicolor Dreamcoat from Jason Donovan on the West End stage in 1991. The second musical he performed in was the title role of Doctor Dolittle at the Hammersmith Apollo in London, before touring the UK. In March 2018, Schofield reprised his role as Joseph for an episode of Ant & Dec's Saturday Night Takeaway.

While appearing in Joseph and the Amazing Technicolor Dreamcoat, Schofield was approached to record a cover of "Close Every Door" to be released as a single.[citation needed] The single was released in December 1992 on Polydor Records and peaked at number 27 on the UK Singles Chart.[21]

Schofield collects Bordeaux wines, an interest kindled by friend Jason Donovan. Asked in 1992 to introduce a compilation video for Donovan, Schofield refused to accept payment. Stock, Aitken and Waterman sent him two cases of Burgundy with a set of tasting notes; he joined the Wine Society two years later.[22]

In 2013, Schofield began writing for the Waitrose Weekend newspaper, and has been the face of wine in their UK stores ever since.[23] Schofield has a separate Twitter account about wine called @SchofeOnWine.

On 8 November 2012, Schofield interviewed then prime minister David Cameron on This Morning, and presented him with a list he had obtained from the internet of five people named as paedophiles in connection with the North Wales child abuse scandal.[24] The names of several former senior Conservative politicians were visible on the list.[25] Schofield was widely criticised for his action,[24] with broadcaster Jonathan Dimbleby describing his behaviour as "cretinous".[26] Cameron responded by warning against a witchhunt, "particularly about people who are gay". ITV's director of television, Peter Fincham, said that Schofield was "wrong" in confronting Cameron and said that the broadcaster had agreed to co-operate fully with government regulator Ofcom's investigation into the matter. The investigation was initiated after Ofcom received 415 complaints from viewers. Schofield later apologised, blaming a misjudged camera angle.[25] Schofield and ITV later paid £125,000 compensation to settle a libel suit from one of those falsely accused, Lord McAlpine.[27]

Schofield has dual British and New Zealand citizenship.[1][28] He married his long-term partner Stephanie Lowe in March 1993;[29] the couple have two daughters.[30] They reside in Henley-on-Thames, Oxfordshire.[31]

Schofield is a patron of the charity Shooting Star Children's Hospices, which offers help and support to families of children who are not expected to reach their 19th birthday.[32] In conjunction with rose specialist C&K Jones, he launched the Schofield rose in support of CHASE (the former name of Shooting Star) at Gardeners' World in June 2006: each rose sold attracted a donation to CHASE. Schofield is also an ambassador for children's charity Kidscape and age-positive charity Royal Voluntary Service, previously known as WRVS.[33]

On 8 October 2012, Schofield became an Honorary Patron of the Blue Lamp Foundation, a UK based charity which raises money to support emergency services personnel who have been injured in the course of duty.[34]

On 7 February 2020, Schofield came out as gay via a statement posted on one of his Instagram stories, followed up in an interview on This Morning, stating that "with the strength and support of my wife and my daughters, I have been coming to terms with the fact that I am gay".[30][35] He has said he thought he was bisexual when he married his wife in 1993, but realised later that he was gay.[36]